Each year Intel selects signature charities for our employees to dedicate their combined efforts towards, providing volunteer time and funds raised through specially organised activities. For 2021, Cycle Against Suicide and Ronald McDonald House Charities were selected, and employees have been taking part in numerous events during the year to date to raise funds and generate awareness in support of the charity.

This week we were delighted to present to the charities a  total of €68,580 which was raised through a range of fundraising events that took place throughout the year.

In addition to the funds raised, over 1000 hours of employee volunteer time was provided to each of the two charities in 2021 by Intel employees.

Despite some obvious challenges this year to the usual fundraising activities, there were a number highlights in 2021. Chief among the highlights was the annual Intel Charity Cycle, which took place in September. This year’s cycle saw 200 Intel employees complete their own individual cycles each taking in a distance and location of their choosing. The cycle event raised almost €19,000.

Employees also took part in fun runs, jersey raffles and a rugby predictions competition to raise funds in support the charity. As well as fundraising efforts employees got in the spirit of the charities by creating a poem around the topic of ‘being kind’ to support the National Hug Day campaign. Intel employees have also been providing practical, skills based assistance to Ronald McDonald House Charities as they work on the design of their next facility at the new Children’s hospital in Dublin.

The money raised was split equally between both of the charities and presented to them this week. The funds donated to Cycle Against Suicide will be used to help support education programmes and materials used in schools on the topic of suicide prevention. Ronald McDonald House Charities funds will go towards the sponsorship of a room in their new house currently under construction on the grounds of the new children’s hospital in Dublin.

Speaking about the donation, Cycle Against Suicide CEO Caroline Lafferty said “Suicide has become a series of statistics and numbers, but it so, not so. Suicide brings it own special brand of devastation and survivors of a suicide loss claim their place in a club no one would wish to join. Cycle Against Suicide is deeply invested in the success of suicide prevention efforts and strive to weave prevention into the very fabric of communities. As an organisation we achieve a huge amount with very little. With such immense support from Intel and it’s employees, we are able to continue to deliver and expand our programmes into schools, communities and workplaces, helping to give people in need the tools to cope and the confidence to seek out help”.

Joe Kenny, CEO of Ronald McDonald House Charities Ireland added, “Thank you so much for all you have done to help support The Ronald McDonald House over the past year. You have cycled across the country, abseiled down towers, knitted items, football jersey day, held online concerts, half hour hero and so many other events to raise much needed funds during a very difficult year for charities. We will be eternally grateful for all of the research and time that went into helping us with the skill’s based volunteering. It has really helped us make informed decisions into the design of the New Ronald McDonald House that is being built alongside the new children’s hospital. You helped us design fire alarm systems, heating and cooling of the house, water treatment systems, intelligent lighting systems and used IOT to design smart sensor housing. As Intel continues to shape the future of technology. You have also helped us to shape the lives of children’s health in Ireland. With your support we can continue to Keep Families Close when they need it most”. 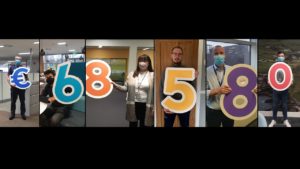 About Cycle Against Suicide
Cycle Against Suicide is an awareness charity that makes a valuable contribution to the public education of mental health by changing the narrative surrounding suicide. They set out to create a society that openly talks about suicide and make sure each individual on the island of Ireland knows that ‘it’s okay not to feel OK; and its absolutely OK to ask for help’.

One of their most important initiatives is their schools programme. They provide toolkits for SPHE classes and train a group of students in each school into their programme to form a school committee.

By staying at a Ronald McDonald House, parents can better communicate with their child’s medical team and keep up with complicated treatment plans when needed. They can also focus on the health of their child, rather than grocery shopping, cleaning or cooking meals.