Over the past number of years Intel has collaborated with the Irish Research Council to support students who are undertaking their PhD in a relevant research area relating to semiconductors and nanomaterials. The 4 year program not only supports the better understanding of these emerging areas of innovation, but is also an important part of developing a pipeline of world-class technical talent for Intel’s future workforce and the global knowledge-based economy.

In 2017 Intel committed to supporting PhD student Rachel Harding whose project is in STEM Education, focusing on gender differences in spatial visualisation skills. Whilst this topic is somewhat different to Intel’s usual PhD collaborations in the areas of semiconductors and nanomaterials, the opportunity to support research that is exploring how gender may influence the STEM learning experience is something that we see as important and valuable.

I was so delighted to be awarded the highly competitive Irish Research Council Enterprise Partnership Scheme co-funded by Intel Ireland to pursue my PhD, as I am incredibly passionate about my research area. Starting out as one of a handful of female physics students at third level, to working in a highly unbalanced field in terms of gender, my goal for this four year PhD project is to transform the current gender imbalance within STEM subjects in Irish secondary level schools. This isn’t about policy or affirmative action, but altering the entire flow of the pipeline into STEM subjects by evening the playing field right at the beginning of the process for girls – their first experience of the scientific subjects in secondary school.

My background is slightly unusual – not just because of the subjects I was drawn to, but I was also home-educated for the entirety of second level. My mum believed education should be driven by self-curiosity and an interest-driven approach to learning and developing knowledge. I was lucky enough to be exposed to a wide range of subjects and experiences – from horse riding and art, to science and poetry. And while that can’t be a solution for everyone, I think the fundamental difference that enabled me to enjoy and excel in a subject like physics was that I didn’t experience the same barriers that many girls do; that of limited spatial ability. I nearly became a professional horse rider when I was teenager, however the moment I picked up my first Junior Cycle science book, and read the physics section, I was hooked. I could see what the concepts meant, and I could manipulate the methodology in my mind to see how it related to reality – being able to think and see in 3D if you like. That is a developed skill, and unfortunately boys tend to develop it more through their normal play activities growing up. Simply put, spatial reasoning is the ability to understand, remember and mentally manipulate the spatial relationships between objects, with clear evidence linking spatial skills to success in STEM, creativity and technical innovation.

It sounds so simple but the mere fact that girls are more often than not raised slightly differently to boys means they don’t develop the same level of spatial ability that is so important for developing within the practical STEM disciplines. Research to date has shown there is not an inherent biological difference, but rather that boys tend to grow up playing and developing in ways that promote cognitive spatial ability while girls tend to be left behind in developing this particular skill set, be that through sports, video games, and construction activities. In Ireland only 25% of physics students are girls and in engineering it’s close to 10%.  Yet I firmly believe that given the same skills, girls would enjoy and excel in the STEM subjects.

In a 2010 study across 53 countries, women lagged behind men in all 53, despite differences in education and cultural influences. Hopefully with more girls currently getting involved with sports and gaming, things will gradually improve but we need a more urgent effective and efficient intervention.

My ambition is to adjust that imbalance from the moment girls enter second level education and start their first steps in studying science. The key for me was to create a system that complements and adapts the current curriculum rather than try and (most likely fail) to instigate, and get buy in, for a whole new curriculum.

Hence my investigation of the effects of spatialising the Junior Cycle science curriculum PhD project was born.

Having achieved a first-class honours grade for four years in a row while studying Physics at DIT, I subsequently won the Intel Prize for the highest overall grade across all four Physics degree programmes in my final year. Bernie Capraro at Intel Ireland met my supervisor, Prof Brian Bowe, who was presenting findings on the first stage of the National Spatial Skills Project at the time, and he was interested in whether spatial ability training could hold the key to unlock future STEM talent. I subsequently met Bernie Capraro myself, at a separate event, and we went from there to apply for the Irish Research Council Enterprise Partnership Scheme with Intel Ireland. Here we are now, nearly three years down the road, with what seem to be really promising initial results.

While there have been previous studies on creating more gender balance in STEM, my project is unique in that it will address a fundamental cognitive barrier to STEM; spatial ability. The great thing about this is that the barrier is fixable; we just have to adapt the learning approach to improve and embed the skills within the science classroom, making it more attractive and feasible for girls to pursue the STEM subjects. If we can shed more light on the relationship between spatial ability, scientific reasoning and physical conceptual understanding, we can develop training courses and materials in order that these skills that can be incorporated into the science curriculum in second level.

I’m currently working with a number of secondary schools across Ireland that are involved in this PhD project, and looking particularly at the physics element within the Junior Cycle science curriculum, the Physical World Strand, and how we can improve these three key areas: spatial ability levels; scientific reasoning; and understanding kinematic graphs (which relates to the mechanics of motion and requires the ability to ‘see’ what an abstract representation such as a graph is actually depicting). As I will not be designing training programmes that would have to be added to the current Junior Cycle science curriculum, I’m focusing on embedding elements within the current learning outcomes in the Physical World strand, giving teachers the tools and techniques without the need for extra time and training. Within the context of Junior Cycle science covering biology, chemistry and physics, I’m focusing on ‘spatialising the Physical World strand, particularly within the kinematics topics that are based on understanding and interpreting position, velocity and acceleration – a particularly difficult concept for students with low levels of spatial ability. I am already discovering that the tools are even supporting the teachers to understand the concepts better which is fantastic.

I have developed key intervention activities to spatialise these existing topics within the normal science class content. What I have learned is that graphing is a huge challenge for girls (and some boys), and as graphs get more complex and abstract, spatial ability comes more into play as the student needs to imagine what the graph is representing and interpret the abstract representation of motion. For those students with low spatial ability, it becomes a really challenging prospect.

What I have now introduced in teaching graphing specifically, is everything you need to know about kinematics and graphing, from sourcing their own data, constructing their own graphs, sketching and comparing so that their comprehension of kinematic graphs is deeply developed, along with their spatial ability. In a typical science class, they are taught these concepts, however my project aims to promote teaching approaches so that low spatial students can overcome the challenges they face by explicitly developing these key skills further. This could be the difference between building a Lego set by following the instructions, or learning how to master the subject and being able to create the set of instructions on how to build the piece.

It felt like quite an achievement to be awarded the Irish Research Council Enterprise Partnership Scheme funding and as far as I know, I’m the only woman to receive four years of funding under this particular scheme in TU Dublin. Intel Ireland have been hugely supportive, and Bernie, as my Enterprise Mentor has been involved even down to school level, helping me find the schools and get teacher buy-in. My PhD is their flagship project to improve their STEM pipeline so they have been incredibly supportive, and this project would not be possible without their continued support.

Once published, I will disseminate the findings by presenting at international conferences and hopefully inform policy for STEM education in Ireland. I would hope that ultimately the new approach to teaching and learning that aims to promote spatial ability in our young STEM students will be adopted and embedded across the Junior Cycle science curriculum. I’m really proud that my project is not just research for the sake of research, but is taking the impact of culture, giving a tangible solution, and promoting physics to the female students for the benefit of all.  Male scientists live in a male world and don’t often see that there may need to be a female perspective. You need creativity and diversity in any team to have a balanced approach.

It’s exciting to think this has the potential to affect real and lasting change on the gender imbalance of STEM subject study in Ireland, and impact the future STEM pipelines of engineering and physics industries. Like all industries, they can only benefit from the balance of male and female approaches to the work being achieved.  And personally, physics has been such a beautiful part of my life. It answers all the big questions, and for anyone with curiosity, physics is an exciting world. I would love more women to experience the joy of being involved in it. 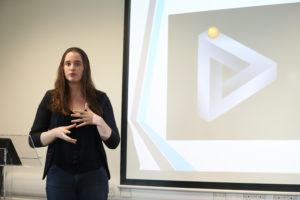