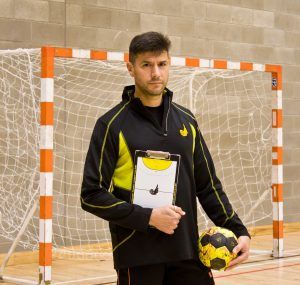 I loved Ireland when I visited 20 years ago from my home in Italy, so when I decided to study my chemistry PhD in an English speaking country, Ireland was my first choice, and I applied to UCD. It helped that my wife is half Irish. We meant to stay three or four years, but somehow never made a plan to actually leave and 14 years ago I took a job at Intel and have been here ever since.

Everyone asks me if I miss the Verona weather and of course I do… summer here just teases with a hint of heat but then before the heat arrives, it’s October!  But it wasn’t the weather I missed the most. From primary school I played Olympic Handball which is very popular across Europe. The only two countries that don’t embrace it are the UK and Ireland so when I came over in 1997 I couldn’t find anywhere to play it. When I returned again, I discovered there were a couple of small teams, including at UCD so I began playing and coaching and when I left, I began coaching the Irish national team. Seventeen years later, I’m an internationally accredited Master Coach (which is the highest level you can go) and am a European Handball Delegate which means I get to work with teams at World and European cup level. It’s my passion – at the moment I’m working on the coaching curriculum that respects the European standard with Sports Ireland and training other coaches – so luckily I don’t watch TV as this takes up most of my spare time! It makes me happy though and it makes me feel I’m doing something useful with my spare time.

When I left UCD I created my own European Handball club and now in Ireland there is both a Women’s and Men’s League. I coach the Under 21 Women and we managed to get to the World cup qualification in Iceland in 2008. Some of the Irish players I’ve coached have found jobs in Europe so they can play European Handball at a higher level. I’m proud that because of my master coaching qualification I am part of the European Handball family, even though I live in a country that prioritises other sports.

I suppose the game that handball is most similar to is GAA but I’ve never been tempted to stray! I love watching the Hurling though. My teenage son Liam is 14 and my daughter Lara is 11 and both played it at junior level, but my son has been seduced by soccer, and my daughter by singing! At least I’ve been able to brainwash them with my music though – I took them the The Cure recently, and my son is learning to play Led Zeppelin on the guitar. You can’t win them all!

Now that I’m playing less sport I’ve taken up running to keep myself in shape. I ran the Dublin marathon in 2011 and still run about 40km a week. I find the long runs really relaxing – they’re my form of meditation. I love to keep learning and last year I got a diploma in sports psychology which really helps as I’m now training other coaches. I love coaching because of the human interaction and the process of helping people reach their potential. The coaching skills have also transferred over into my work at Intel where I volunteer to teach a class on constructive communication, and the class is open to everyone.