Intel is a place that is full of brothers, sisters, mothers, fathers, friends and neighbours and we are proud to share their stories  – in this special edition of the series to coincide with the celebration of Pride month, we share the story of Ann-Marie Byrne. 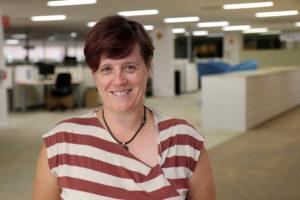 Around the same time, I met my partner Mairead and we both were just starting our careers. Little did we know that nineteen years later, we’d be trying to work those careers from home while home-schooling two children under a global lockdown! Tadhg is 11, and Aine is 8, and let’s say it sure has been challenging trying to juggle it all.

I’ve always known who I am and what I wanted in life. I grew up in Tallaght and was the first person in my whole family to go to college. I was 15 when I first came out to my friends, and they all were so accepting. However, that said, it was 1991, and it was not legal to be gay in Ireland. It did not become legal until 1993. There was no youth organisations back then and I was also too young to go out clubbing. It has changed so much since then which is fantastic for young people.

I’ve always been open and upfront about my sexuality, although never chose to push it in anyone’s face as such. I was just determined to get on with my life. As Mairead is a tax accountant, we were aware that as a couple, we didn’t have the same rights as other couples, but we just focused on building our life together, having our kids, creating our home. Thankfully, the equality referendum now provides the same rights to all.

I’ve spent a number of periods working in the States and became aware of their Intel Gay, Lesbian, Bisexual or Transgender Employees (iGLOBE) initiatives which I participated in while working in the U.S. They were great social outlets where I would be invited to member’s houses for dinner and it really added to my overseas experience. Another engineer in the Intel team in Portland was gay and we became great friends while in the States. The U.S. Intel campuses always seemed to have large and lively LGBTQ communities, whereas in Ireland it is more low-key despite being an estimated 10% of the population, I’m not sure why.

It is great that Ireland’s iGLOBE chapter was set up last Autumn and I am delighted to be part of it. Although I’ve always felt I was able to be myself at Intel, I do think having that visual representation is really important, especially when we are trying to attract and retain younger people. I wish it had been promoted much earlier because inclusion of race, gender, sexuality, ability is vital. It’s such a shame that COVID came along and disrupted the new initiative, but I know the iGLOBE coffee mornings have been continuing online. Unfortunately, they clash with one of my regular meetings, so I haven’t been able to join in as much as I would like to. I was also asked to get involved with Pride which I was happy to do. I had the honour of raising the Intel Pride flag at the Leixlip campus this year. I used to go to the parades but since we had kids, it became more difficult, although we did take the kids a couple of years ago and they loved it.

We live in Leixlip and have never encountered any adversity. It’s great to see kids accept our family just as they would another type of family unit. Ireland has changed so much in the nearly 30 years since I came out in 1991. It is fantastic that the mindset has changed and now it doesn’t even warrant a second thought. It’s the way it should be and thankfully our kids have not experienced any negativity…our family is no different than any other family…the same trials and tribulations.