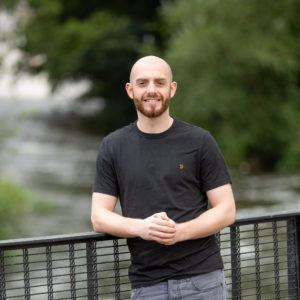 I grew up in Derry and was involved in quite a few sports, one of which might be surprising to many! I came straight to Intel from college, although I was older because I took some time out when I was younger to go to the UK and trial at some of the football clubs. I was lucky enough to go to Ipswich Town where Roy Keane was manager and a few other Irish lads were there, so that was a great opportunity. I think I was too young though and decided to come back to Derry and do my A-levels. I was lucky in that I had other sporting passions to keep me active – a weird combination of Irish Dancing and GAA!

I was actually born very premature so my muscle development was weak. My Mum who was an Irish Dancer herself thought it might be a good way for me to build muscle so I started dancing when I was five. Little did she know that I would excel at it and dance until I was 22! Three months after I began, I entered my first competition and got a basic certificate. From the next year on though, I was never lower than the top three in Ulster. I was actually Ulster champion and Ireland Champion multiple times, and finished 2nd five times in the International “World” Championships. You wouldn’t look at me and imagine a dancer but I loved it! I had to take a break for college, but at some stage I’m going to study to take the teacher exams as it would be a shame to let it all go to waste.

When I was trialing for the football clubs in the UK, I felt like a small fish in a very big pond, so I really enjoyed returning to my other love – GAA – when I got back to Derry as I knew if I worked hard and focused I could feel a part of something incredible. I played all through school, then college at the University of Ulster, and through my masters at Queens. Along side the dancing it meant I was really busy! I love finance and maths so that’s what I studied, and then the fact I played a lot of soccer and GAA helped me really settle and get the best out of my college experiences.

I played for Derry as a minor and Under 21 and then was selected for the Derry Senior panel at age 22 and played for a year or so until I moved to Dublin. My manager then suggested I try out for a new GAA show on TG4 called the Underdogs. I was thrilled to be selected for the panel although I was more worried about my Irish skills than my kicking skills! But through the process of doing the show and being immersed, my Irish got much better so that was a great side benefit as well as playing with some of the GAA greats of the moment. The show was to give players the chance to play against an inter-county team, and I wanted to better myself and get back up to that level so it was an incredible experience. The day after Halloween 2019 we played Mayo on TV and it was amazing… we were beaten but thankfully not as badly as the first year’s team that played Dublin!

As soon as I began working at Intel I joined the Intel GAA team. I’d actually done my Masters placement at Intel and loved it and when I was down on my placement in 2017 a GAA team was re-established for the first time in years. We got to the Inter-Firm All Ireland Final having beaten Kingspan in the semifinal. Unfortunately we were beaten by Liebherr Construction in the final. It was great for me as a student to meet the guys in Intel and I resumed it when I started work and it has broadened my experience of the company by meeting people I wouldn’t normally get to through my work.

My goal now is to take Intel to become the All Ireland Inter-Firm Champions! I know we can do it.