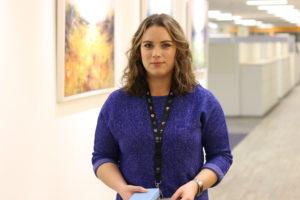 I started working at Intel straight out of college five years ago, and have been lucky enough as a technician that our full team stayed working on site this year, so there’s been lots of social interaction in a year when I know many have had to work from home.

I’ve always had an interest in first aid and joined the emergency response team on-site 4 years ago so when I was given the opportunity to attend a training course to become a first aid responder I jumped at the chance. I completed the training and was certified two years ago. We have regular drills on-site and have to get re-certified to keep us fully effective.

Thankfully I’ve never had to respond to anything too life-threatening here at work, but all my theory and skills were put to the test for real at the end of September. It was a dark miserable morning, and it was lashing rain when I set off for work. I came on to the motorway and saw that the traffic was at a snail’s pace and suspected an accident up ahead. As I got closer though, something made me stay in the lane beside the hard shoulder while everyone else was pulling out to get passed. When I saw a lorry pulled over and three guys standing by the ditch I realised immediately that one looked injured and was covered in blood. I couldn’t believe no-one was looking after him!

Without me even realising, my training must have just kicked in, as I knew he shouldn’t be standing with any sort of head injury, so I immediately pulled in. I grabbed the first aid kit and a blanket from my car and told them I was a first aid responder. It seems the young man had crashed his motorbike into the back of the lorry. I got him to sit on the ground and tried to assess his level of consciousness and if he had concussion by asking him questions and trying to reassure him. Because he told me he came from a town near me, I kept asking if he knew various people just to try and keep him chatting! He was only 18 and although calm, he was clearly shaken up. He kept asking why he couldn’t open his eyes, my hands were shaking as I tried to see what was in my first aid kit looking for saline or wipes to clean away the blood. I was concerned he wasn’t wearing a helmet, but he told me it was on when he crashed, but that it had fogged up in the rain and obstructed his vision which is why he ran into the back of the truck.

It was so dark and all I had was my phone, so I turned on my phone-torch to see his wounds. I had to tell him he was badly cut around his eyes, but thankfully it didn’t look too bad once I cleaned away some of the blood. I knew the lorry driver had called an ambulance so I just kept reassuring him that it wouldn’t be long. He wanted us to call his dad so I got them to find his phone and dry it so we could let his dad know what had happened. I just kept talking to him and keeping him company. As it was still raining the lorry drivers eventually came over and held a plastic sheet over us until the ambulance arrived. As soon as the paramedics took over, I called the dad again to let him know what hospital they were taking him to.

It was only when I got back in my car that it hit me, and I felt overwhelmed. I guess it was the adrenalin, and perhaps being so wet and cold, I started shaking and crying and I had to go home and shower before heading back to work. Afterwards though, I felt nearly euphoric because I couldn’t believe how automatically the training had just kicked in and I had just known what to do. It’s given me a real sense of confidence that I now know in an emergency I’ll stay calm and focused. It takes an unpredictable and unexpected situation to really test the training, and I now know how well it works.

That evening his dad texted me to say thank you for staying with his son and keeping him up to date which was lovely. He also texted me the next day to say his son would be laid up for a few weeks but was ok and that was brilliant to hear. It feels strange to put someone off in an ambulance and then not know what happened next. I’m just glad it ended as well as it did. He was so lucky because his bike looked badly damaged and hitting a truck that size would have been much worse if it hadn’t happened just as he was slowly joining the motorway from the slipway.

I’m so glad I was given the opportunity to train as a first aid responder at work, because I’ll take the skills with me throughout all aspects of my life. I’ve recently been looking at joining the cardiac first response team in my local town, whereby if the emergency services get a call about someone having heart problems, they can alert the local group to see if anyone can get to the scene before the ambulance.

I didn’t tell my team when I got to work that day as I didn’t want to make a fuss, but I did tell my manager and it seems to have got out. I feel a bit embarrassed to be honest, but I’m mostly just thankful that I was there, and that it ended as well as it did. It’s great to know how well the training works and that I can help someone wherever and whenever I can.