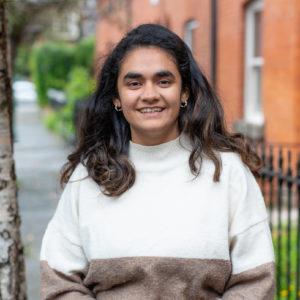 Women have inspired me to be where I am, and now I want to do the same. I grew up in Kolkata, in a background of financial adversity. Kolkata (formerly called Calcutta) is a city in a state called West Bengal in India.

I worked really hard. If I got 95% in a test, I’d be worrying about the 5% I got wrong. After completing my degree in Finance, I wanted to do my Masters overseas and so I chose Ireland because it has a 2 year stay-on policy which would enable me to gain international work experience. I arrived in September 2016 to start my Human Resources course in DCU.

Unfortunately, the first two months were taken up with me trying to find affordable accommodation. I’m a pretty resilient person, but that desperate hunt for accommodation really threw me initially. Once I got my accommodation sorted, I really settled in though and enjoyed my course.

For a couple of years I worked with a Recruitment agency and learnt a lot there, but was very keen on progressing and I wanted to stay true to myself by not staying in a job just to be in Ireland; I want to do something meaningful and I want a job that will add value to my career, so I was delighted to start working at Intel last November.

I feel like I’m making an impact as my role includes making sure we open the door for female talent. In India, STEM subjects are generally seen as the economic option and so many girls study them. In Ireland and Europe I can see that there is a much greater gender difference in take-up of STEM.

In the aftermath of George Floyd and Black Lives Matter prominence I’ve realised that until recently I’ve never needed to identify as a woman of colour, merely just my gender. But now I do. It hasn’t been an easy ride for me, but I want to be a successful role-model to women of colour.

I want to focus on how I give back. I want to contribute to a micro-financing charity because I know how much that can help a woman build a small business. I also want to work to ensure there is more visibility for women of colour, for myself and to pave the way for others.

I’ve hugely benefited from being mentored initially in my career. I think women should have multiple mentors to help them move forward in their professional life, and I want to give back by mentoring other women.

I love knowing I can help people, and having been inspired by women who have paved their own path, I hope someday I can be an inspiration to others.