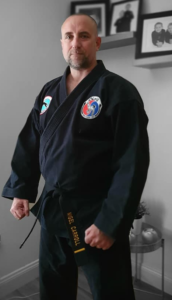 My job in Intel involves staying really calm and focused in the moment as I am a first responder for all emergency calls on site. Every day is different, dealing with various types of calls from leaks to odors, but the hardest emergency calls to respond to in my opinion are the medical emergencies, because so much more is at stake. I sometimes get called for things that aren’t really my remit, but I’m the guy they call when birds are flying around a room or hallway! The ongoing training is really important to keep confidence levels high, because I have to be very clear about what I’m doing. I can’t be panicked in any way when I respond to an emergency call.

As well as the continuous training, I also think my eight year practice to become a Black Belt in Taekwondo has really helped me learn that skill of calmness in a crisis. It is a very personal discipline and impacts every part of my life. People might think martial arts is just about kicking and punching, but I’d say that about 70% of it is attitude, and how you live your life with honesty, courtesy and respect for others. It can’t be taken lightly because you have the power and skill to really hurt someone, and so you have to be very centred and focused.

I started Taekwondo when my son began learning it, and I would sit at the back of class watching him. One day I just decided I’d give it a go, and it’s changed my whole life. When I go into the dojang (the training hall) I forget everything around me because it requires a very deep kind of concentration. Breathing plays a big part at the beginning, calming your body and getting into the zone and the right frame of mind. It’s not like a sport like football where you’re running around and shouting. It’s a very personal and deep experience.

I kept working through the belts and started competing in Ireland and the UK. I made a decision that I wanted to be tested for my Black Belt by the Grand Master He ill Cho which meant travelling to Hawaii. He is the founder of the particular type of Taekwondo I practice (A.I.M.A.A) and it was one of the most terrifying – and most satisfying – experiences in my life. There was a lot of pressure to perform on such a big stage but it was an amazing feeling when I passed.

I then decided to open up my own school – Chos Taekwondo Rochfortbridge – where I teach all ages. Martial arts has always been popular in Ireland, but has grown substantially in the last ten years, maybe as a result of the popularity of UFC and Conor McGregor. I want to grow the school too to include self-defence classes for girls and women.

It is so powerful for young people to learn, and the most rewarding part for me is watching a young person transform as a result of the discipline and respect of the practice, and how it changes the way they behave in all areas of their life. I will always end a class by talking about the principles of Taekwondo – modesty, courtesy, integrity and respect for others. But it can be beneficial at any age. I’ve seen people start at the age of 61. You don’t have to get involved in the sparring or competitions, but can just take what you need from it, which could be simply about the stretching, building strength, and the impact on your physical and mental wellbeing. One principle I like to share is ‘’your best self defence tool in your body is your brain! If it doesn’t feel right then more than likely it’s not, so walk/run away.’’

It’s intense working full time and running the school but my wife Sonia helps out with the admin. It’s become such a passionate part of my life and I couldn’t be without it now.