Intel is a place that is full of brothers, sisters, mothers, fathers, friends and neighbours and we are proud to share their stories  – in this special edition of the series, we share the story of Shane Gallagher and his family. This year Shane, an employee in Intel’s Fab 24, is the champion of Intel Ireland’s 2020 signature charity – CMRF Crumlin.

Sometimes at the toughest times in our lives, we need others to advocate on our behalf. I’ll never forget how the staff at Crumlin fought for me and my wife Sonya to be with our son when they switched off his life support. 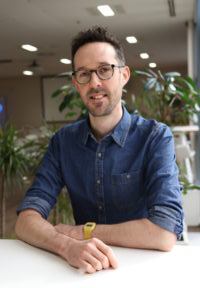 We had arranged to donate his heart valves, which meant that we would have to say goodbye before he actually passed away. But knowing that we were in no fit state to speak up, the staff did, and we got to be with him until the very end. That gesture meant everything to us.

I’m now grateful for the chance to advocate for them, to support and raise money for Crumlin Hospital as the Charity Rep for Intel.

When Sonya and I got married in August 2011, we were excited about starting a family. However, when it became clear it wasn’t happening naturally we sought help, and were devastated by the news that we couldn’t have children.

We began the arduous journey of IVF, and couldn’t believe our luck when we eventually had our beautiful daughter Freya, who was born on 3rd October 2016.

We decided to try again, and again, were so blessed to be successful. So much effort goes into a pregnancy like this, that you never really relax until you hold your child in your arms. Inis was born healthy on the 15th March 2018 and we were gobsmacked at how lucky we were to finally have the family we’d always dreamed of.

We got him home just before St Patrick’s weekend, and while the Beast from the East raged outside, we had an amazing family weekend with Freya, Inis, and our parents. Despite Ireland winning the Grand Slam that weekend, we knew it was us who had won, after so many years of heartbreak and disappointments.

However by the Tuesday, Sonya felt something was wrong as Inis wasn’t settled and had stopped feeding. Initially a visit back to the Coombe reassured us that he just might prefer a different bottle.  That night, however he still didn’t settle and just kept mewling with a low level moan. We weren’t prepared to take any chances so we took him into Crumlin, driving in the bus lanes, desperate to have him checked out.

Because he was only a week old, we were seen immediately and just as they were hooking him up to monitors, he had a seizure.

There is no feeling in the world like that of a powerless parent who can’t help their child.

We just stood back, horrified, while staff rushed him to Paediatric ICU. All we could hear were the little beeps of his heart on the monitor, our heads in a spin, not knowing what was happening. He continued to have seizures, and we just had to wait, unable to help or do anything while the staff worked with him.

I couldn’t believe what I was seeing – my precious little baby boy, on life support, with drips and tubes coming out of his tiny body. We couldn’t even hold him.

Even then, I remember the staff being so kind and supportive, caring for us as much as for him. The next day, an EEG found that despite the appearances of stability, he was still having seizures and there were periods of no brain activity.  He was rushed for an emergency MRI brain scan and on Thursday we were told that he had suffered massive brain damage.

The damage was so severe, all his systems were utterly compromised, and he couldn’t breathe by himself. We knew then that he wouldn’t survive at that point.

There is nothing that can describe the devastation. The doctor told us that they needed to carry out tests to determine the cause of the seizures and he would have to be kept alive until Monday. The agony of those few days was unbearable as family gathered, and we had him baptised.

The staff were extraordinary. They are just unbelievable people, an incredible blend of professionalism and capability and mixed with such heart and feeling. Their attention to detail – bringing us drinks and sandwiches because we were in no fit state to think about that, and even sorting out our parking for us without us knowing, was way above and beyond their job. They cried with us, supported us, helped us even though ICU nurses are under such pressure all the time. They did everything they could for us.

On Monday 26th March, when it was scheduled to turn off the machines, we’d no idea how long it would take. The normal procedure with organ donation is that the transfer happens very quickly after end of life and so he would have to be taken away before that happened. We were so emotionally handicapped with our grief, the staff advocated for us and insisted we got to say goodbye when he passed away.

I can never thank them enough for that gift. We took him out and held him, and at 1.30pm they switched off the machines, and 1.35pm he died in our arms.

Even then, with all the subsequent admin relating to post mortem and organ extraction, the staff gave us their unwavering time and support. I just don’t know how people do that – they are an incredibly special breed of person.

Months later we found out that Inis had picked up a virus in his earliest days – a virus that 80% of adults get and overcome easily, but proved fatal in newborn babies. It was very hard to come to terms with how random his death was, but we knew we couldn’t dwell on that or we would never recover.

I want to try and help because I know there are parents standing in those rooms in Crumlin today, going through hell, and that hell is only made easier by the staff there.

We have a lot of events planned here at Intel – Sonya and I will be selling tickets and attending the Formal Ball later in the year because we want to show the amazing people who got us through the toughest time of our lives, how much we appreciate their extraordinary work.

We want to raise enough money to buy at least one specialised operating table, at €60,000 but I’d I’d like us to aim for two. I know we can do this as a company.

Crumlin hospital is not just a building. It is a living entity, the heart of which is its people, and I know so many parents have felt that heart beating for them when they’ve needed it,

Inis is very much a part of our family, and he is talked about all the time. Five months ago on the 10th October, 2019, we welcomed our beautiful daughter Cadha to our family, another miracle. She looks like Elvis with more hair than me, and Freya is ecstatic to have a little sister!

We went through so much stress and terror during the pregnancy and even then, it wasn’t until 12 days after she was born, the time that Inis lived, that we could properly exhale.

For every parent that will ever walk through those doors at Crumlin, and for every hospital staff member who performs minor miracles of care and love and support every day, I hope we break all fundraising and volunteering records this year, because I know just how much it will mean.

We aren’t raising money for a building;

In response to challenges created by the global coronavirus pandemic, the Intel Foundation has established a special donation matching campaign to amplify Intel employee contributions. Intel employees who donate to CMRF Crumlin, ALONE or Jigsaw will have their donation matched.