National Engineers Week takes place this year from February 27th until March 5th. The week-long festival of nationwide events, of which Intel is a proud supporter, celebrates the world of engineering. 63% of all Intel employees are engineers and to coincide with Engineers Week, Intel Ireland will share our #HowIBecameanEngineer series. The series shares an insight into the many different and diverse pathways that can lead to a career in engineering. Next in the series is Gordon Kelly, a Solution Architect in the Networking Processing Group in Intel Shannon, who shares an insight into how he became an engineer. 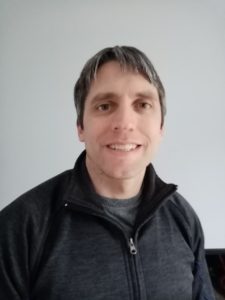 Can you share a brief description of what your job today at Intel involves?
I am a solution architect for media processing and delivery. Our segment is focused on Video processing for Broadcast, Video On Demand and Live streaming. It is my job to work with customers to understand what their requirements are from a product perspective and to identify what Intel solution best meets their requirements. I also work with engineering to ensure that products, both Software and Hardware, that we are developing meet customers’ requirements.

Can you briefly describe your pathway to engineering at Intel?
Upon completion of my Leaving Cert back in 2000 I commenced a 4-year electrical apprenticeship. I worked on industrial and commercial electrical installation around Ireland for 10 years including at many power and pharmaceutical plants until I was made redundant in 2010 due to the global recession. Around the time a lot of people who had been working in construction decided to upskill via a college course, and I chose to do likewise. I had originally applied to do an ‘Energy Engineering’ course in Galway Mayo Institute of Technology (GMIT) but as it was full it was suggested that I join the ‘Electronic and Computer Engineering’ course instead as it was a popular course for electricians wishing to upskill. To say that I was sceptical at first would be to put it mildly as I had little background in computers or engineering, but I found out that I enjoyed learning about the technologies that under pin the ICT industry and qualified with a Level 8 Degree in 2014 from GMIT. I started work in Intel Shannon 2 weeks later. 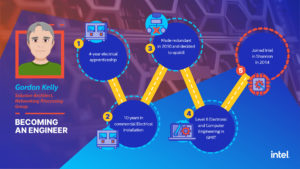 Check out the other stories in our How I became an Engineer series.