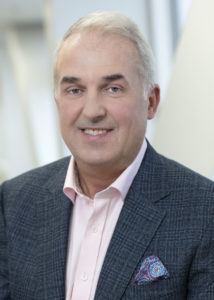 Based in Ireland, he leads the organisation that manages shipping and delivery to Intel’s global factory network and worldwide customers. Intel manufacturing facilities rely on the logistics team’s ability to move product and equipment as quickly as possible, regardless of conditions.

Intel customers also depend on this same expeditious shipping and delivery, even despite such unpredictable events as volcanoes, labor strikes or epidemics. O’Connor works across Intel and the logistics industry, including global third-party logistics companies, freight forwarders and integrators, to devise strategies and deliver world-class logistics solutions that provide excellent service for Intel customers and help the company grow.

A 30-year veteran of Intel, O’Connor joined as one of Intel Ireland’s first employees in 1990. During his first 10 years with the company, he held various positions across supply planning, customer service and logistics to support Intel Ireland systems manufacturing. He was subsequently named European Logistics Director in Intel’s customer planning and logistics organisation. In that role, O’Connor managed the distribution of capital equipment, raw materials and finished product across the Europe, Middle East and Africa region. In 2010, his sphere of responsibility grew to include logistics throughout the Americas region as well. He has served as Director of Global Logistics for Intel since 2015.

O’Connor earned a diploma in management and an MBA degree, both from the Open University business school in the United Kingdom. O’Connor is married to Trish and has two children Liam and Shane. He is originally from Co. Westmeath and now lives in Ratoath, Co. Meath.