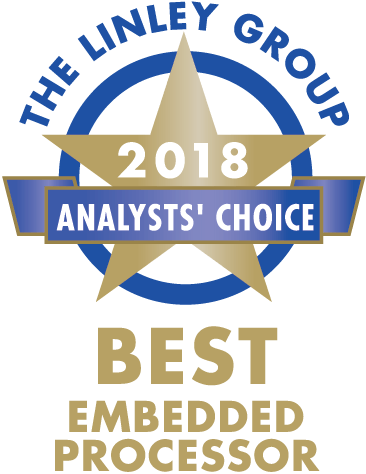 “The competition was fierce this year as we considered many outstanding semiconductor products. These technology innovators stood out from the rest in their respective categories,” said Linley Gwennap, founder and principal analyst at The Linley Group. “Our annual awards recognize the products that we believe will have the greatest market impact in their target applications.”

The Linley Group’s analysts selected the winners based on the merits of those that entered production (or, in the case of IP, released to RTL) during 2018. The analyst team is well-versed in all the leading technology products and evaluated the contenders based on performance, power, features, and cost of each device in the context of their target application.

The Intel Movidius Myriad X Vision Processing Unit (VPU) is the third generation and most advanced VPU from Intel. It is the first of its class to feature the Neural Compute Engine – a dedicated hardware accelerator for deep neural network inferences. The Neural Compute Engine in conjunction with the 16 powerful SHAVE cores and an ultra-high throughput intelligent memory fabric makes Intel Movidius Myriad X the industry leader for on-device deep neural networks and computer vision applications.

Intel’s Myriad X VPU has received additional upgrades to imaging and vision engines including additional programmable SHAVE cores, upgraded and expanded vision accelerators, and a new native 4K ISP pipeline with support for up to 8 HD sensors connecting directly to the VPU.

Intel Movidius’ largest design centre is located in Ireland and the Irish team were heavily involved in the design of Myriad X along with colleagues in the U.S. and Romania.

Following are the full list of recipients of the 2018 Analysts’ Choice Awards:

Intel (NASDAQ: INTC), a leader in the semiconductor industry, is shaping the data-centric future with computing and communications technology that is the foundation of the world’s innovations. The company’s engineering expertise is helping address the world’s greatest challenges as well as helping secure, power and connect billions of devices and the infrastructure of the smart, connected world – from the cloud to the network to the edge and everything in between.