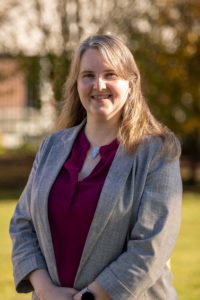 My interview at Intel eight years ago was the first time I ever took the decision to be upfront about my disability. Most people won’t pick it up when they interact with me unless they see my hearing aid. I was terrified but thankfully it paid off, and my career here has been exciting and inspiring.

I was just two when it was discovered I had only 20% hearing in one ear, and 50% in the other. This was back in 1980’s Ireland, when disability wasn’t talked about. My parents were told I would never be able to talk, go to mainstream school, and would be dependent on them for the rest of my life. I have my parents to thank for the fact I am here, as an engineer at Intel living a fully independent life. Thankfully they instinctively made a decision to give me every opportunity and chance they would any child. They read to me every night of my young life, and because they were so close to me, I could hear them, so my speech developed normally. I also learned to naturally lip read. This made life easier when my twin sisters arrived a year later, as I had to read lips over their screaming!

I wasn’t given a hearing aid until I was seven. The day it was fitted was mildly traumatising because suddenly everything had sound! My mum took me to the coffee shop in Roches Store for a treat of jelly and ice cream, but I couldn’t eat because of all the noise of knives and forks hitting off the plates.

However, school was really challenging for me because I couldn’t hear and understand very much and probably came across as standoffish to the other kids. It was quite isolating as I never really got involved and couldn’t engage with them. I couldn’t tell which direction sound came from and they would make fun of me. I suppose I was the first disabled person they ever met, and certainly the first deaf person. Not all kids can be tolerant of the child who constantly says ‘what?’ It was difficult for me to figure out what I was doing wrong so I didn’t really pick up the social skills until I got to college. Thankfully I’m fairly bright and kept up even though I was only hearing about 60% of the learning. I had no way of articulating what I was missing though, because how do I know what I haven’t heard?

I actually don’t use the term disability much in my own life, as I disassociated with having a disability as a teenager. I had a defensive attitude that I could do everything myself, so I refused to ask for help and I know now, that wasn’t always in my best interest. Now I like to focus on the abilities that being hearing impaired has given me. I tend to empathise with people and am very good at reading body language, since that’s about 90% of my communication. I also have a very developed sense of attention to detail which of course, helps in my career.

I always had an interest in science, wanting to understand how things work. Despite my career counsellor telling me there was no point going to college since I’d never be able to get a job, I was determined and went on to study forensic sciences, and analytical chemistry.

It took me a long time to be accepting of who I am and the fact, like everybody, I have skills and qualities along with limitations. On the morning of my first Intel interview, I made the decision to be upfront about my hearing impairment. Before, I would always wait two or three meetings to prove I was competent before they might judge me on my impairment. But I’d got some advice and they told me that if I set the tone and take ownership of it, it won’t be used against me. So, I walked into the room and before they began, I told them I was hearing impaired and may need to ask them to repeat the questions occasionally. I was so stressed with saying it, I nearly blacked out and actually missed the first question asked but they just thanked me for telling them and carried on. In the second interview, I did the same thing and afterwards threw up in the bathroom from the shock of having told them. But it has never been an issue, and I love my work here. The only real difficulty was in meetings if someone spoke softly or if there were multiple conversations going on. Sometimes in the Fab we might be masked up in which case I can’t lip read which is about 60% of my ‘hearing.’ The last 18 months with COVID has been challenging in that regard.

Things had been working well but about four years ago, I discovered that my hearing had significantly deteriorated without explanation. Just afterwards I was in a work meeting which was very busy with multiple conversations and several soft-spoken men and I was really struggling to catch what was going on. I thought to myself, if this is what it’s going to be like, I will have to quit my job. I was in tears when my manager walked in. He immediately brought me out and I told him what was going on and he never once looked at it as a problem but went straight to solutions. He committed to no more meetings with multiple conversations and then asked what else I needed. He went straight to, ‘how can I help you’, with no questions or censure. I did some research and decided to try an omni-directional microphone. My manager helped clear the way for me with HR and IT and I piloted the microphone. I can honestly say it transformed my life. For the first time, I could sit anywhere in a room and pick up not just the person next to me, but everyone in the room. I could also take notes, whereas previously I couldn’t write and lip read at the same time. With the microphone, I can rely 100% on my hearing and be more effective in meetings. I even went to a presentation and placed the microphone up near the speaker and then could sit anywhere in the room. It’s been an absolute game changer. There’s a strong possibility I would have had to leave Intel without it.

Outside of work, I live as normal a life as anyone. I travel and the only extra precaution I take is to alert the hotel staff that I might not hear a fire alarm. For many years I practised martial arts, and only stopped when I discovered from an MRI scan why my hearing is actually impaired. There is a very minor malformation in my cochlear bones, and I was advised not to do any contact sports. Luckily, I’d been good enough at marital arts I didn’t get too many blows to the head! Now I enjoy developing my love of crafting and making things with my hands, like jewellery.

At the moment I feel in a good position and don’t need any additional supports. That independent streak of not asking for help though had made life a lot harder than it needed to be, and it’s something I continue to work on. It took me a long time to accept failure as a part of life and not to be afraid of it. I love public speaking and do a lot of training for new employees. I make it a point to tell them to never be afraid to ask questions or ask for help because that was a lesson it took me a long time to learn. In the end, I was determined to succeed and found my own way to do that. I would urge anyone else to do the same.