My daughter Pearl was born in January so lock down has been a rather special experience as I’ve been able to work from home and not make the long commute to and from Bray every day. I came to Ireland from Jamaica in 2006 to do a PhD at Trinity and then continued on to do research. I was teaching Hip Hop and Jamaican dancing as part of the Afro-Caribbean Society when Stephanie walked in for lessons and we ended up getting married in 2014!

I was 23 when I arrived and it was the beginning of a hot summer, and I thought it felt like home as I hung out in my flip flops and shorts but I got quite the shock when winter arrived! Someone had to tell me to go to Penney’s to buy a duvet as I was freezing under a single sheet! It’s funny then how we went to Jamaica one summer and both my wife and I found it too hot. Now we go home every Christmas instead.

I settled in immediately though, and started playing for the Trinity social cricket club as I am a big cricket fan. I also play for the Pembroke Cricket club, although my playing has been curtailed now I have a new baby! I became an Irish Citizen in 2018 and I’m proud to put on my green jersey to support the Irish cricket team when they play.

I have experienced racism here and I think every person of colour in Ireland will have been called the N word at some stage. I think a lot of that is to do with the fact that Ireland is relatively new to immigration. We were watching Reeling in the Years recently and it was 1995 and they were asking people in the pub what they thought about the OJ Simpson trial. There wasn’t a single person of colour in the crowd. That is obviously changing, and I suspect Ireland will be a different place when Pearl is a teenager. She’s our first child and it’s been an interesting backdrop to her first few months as the Black Lives Matter has been so prominent in Ireland and around the world. I think with all the protests it has brought the conversation into the mainstream – that here is a group of people who are disenfranchised. Racism isn’t just about calling someone names but about seeing CV’s sitting on a desk and making a decision based without inherent racism. She is going to have challenges no doubt, but my hope is that she knows who she is, and is proud of both her cultures.

I do feel an obligation to role model a different perception to that which people often have of a black man as someone who is an immigrant living off welfare. In my team I’m the only person from the Caribbean so the onus is on me to set an example and show that people of colour are smart and can do a good job. I don’t want to be the ‘diversity hire’ but to make a meaningful contribution and make an impact on my own merit.

I knew when I left Jamaica that I probably wouldn’t be going back to live, as the job opportunities just weren’t there. The economy there is still very weak and I remember when I arrived in Ireland being surprised by how convenient everything was, and how good the public transport was. My family didn’t want to see me go obviously, but they knew I had to take the risk. I definitely made the right choice as I often feel my job doesn’t feel like work because I love it so much.

There are also a lot of cultural similarities between Ireland and Jamaica in terms of strong family values, strong respect for your parents and in many ways both were under the influence of the English and our struggles were similar. We also both love music and dance. When I came to Ireland one of the things that gave me so much confidence was being able to dance and express myself and connect with people. Dancing breaks down barriers. There isn’t a dancing club at Intel, so the only time people might see my moves is the Christmas party!

Sadly we won’t get to introduce Pearl to my family in Jamaica this year as travel is so limited due to the pandemic. Jamaica shut down early but tourism is the major source of income and as soon as it opened up, the numbers are starting to rise. We’ll be holidaying in Longford this year in Centre Parcs instead. Now that really feels Irish! 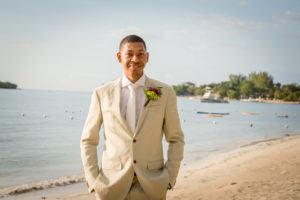