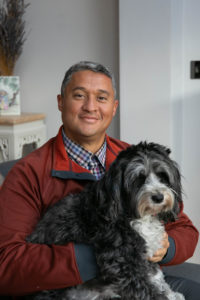 I’ve worked for Intel for 24 years – it’s a bit like Hotel California; “You can check-out any time you like, but you can never leave!”. My wife, Maria and I have both been given incredible opportunities at Intel, that’s what keeps us and many people here.

I studied electrical engineering in Costa Rica. It is a beautiful place, but even when I was very small, I dreamed of travelling around the world. Intel came to Costa Rica in 1997 and I was in the right place at the right time, straight out of college I began working here. I met my wife through work, and we’ve both travelled with the company many times. She was sent to Arizona for a while in 1999 and in 2000 she was offered the chance to move to Ireland, and although we knew nothing about the country, we were 26 and decided it would be an adventure. We’ve lived here and loved it ever since.

We have travelled and worked in other countries too over the last 24 years, but always come back here. We worked for a while in Oregon, spent three years in China, and one and a half years in Haifa, Israel. We’ve loved all our locations, but we prefer Ireland (apart from the weather!). I feel at home here, because there are many similarities between Costa Rica and Ireland (that weather not being one). Social capital is more important than economic capital in both, with family and friends being of greater value.

Costa Rica is a very special country, with many of the privileges of a richer country. Education is free all the way to undergrad degree. Healthcare is good and free, mostly because there is no army to invest in. Costa Rica is best known for its nature and National Park system. Back in the 1950’s, the government took the decision to protect 30% of the land which hosts the most biodiversity (density of animals and plants per square kilometer) in the world. Costa Rica has 0.03% of the world’s land but 6% of species in the world. It also remains one of the happiest places in the world. Yet there is no perfect place, and it has plenty of problems.

One of the requirements in Costa Rica when you study medicine, is that every student must spend their first year as a doctor, working in a poor or remote area, earning minimum wage. I thought, why not bring that same approach to every sector, including engineering? So, after college, I found a job in a remote area where my grandfather had come from, and I committed to a year teaching in a technical college. I love teaching, and so when Intel hired me, I continued to teach at weekends. I used to tell people I worked as a teacher, and for fun I went to Intel Monday to Friday! When we were based in China, I volunteered as an English teacher. Here in Ireland, before the global pandemic, I taught tennis to kids at weekends, and I hope we can get to start that up again.

What interests me as a manager is how to develop people, how to excavate the raw diamond from the rock. I believe good leaders are teachers, and you can measure a leader by the number of leaders they create. I never understate the power of someone’s story. That inspires me to hire people who are diverse, and I work hard to find the talent and diversity from around the world, because diversity brings so much more energy and perspective to teams.

I saw this in Israel where, as a start-up country, the population are a melting pot of cultures, as the people arrived from all over the world. After the US, Israel has more patents than any other country. That diverse energy brings about such creativity. I find the way people interact fascinating. In Israel everyone likes to argue and fight and that is how they find the best solutions, in a way that would never be accepted in Ireland. Then in China, interaction is based on politeness and respect. My son Antonio was taught manners, respect and how to follow orders in school in China. But when we moved to Israel he had learn to fight and grab and stand up for himself. As we moved back to Ireland, he got into trouble for being too aggressive, so he had to learn a new way again!

Travelling and learning about cultures is still very much my passion. “Those that do not travel are like grabbing a book and only reading the first page”. The pandemic accelerated the concept of work as being something you do, rather than a physical location. It will be interesting to see how the idea of nomadic workers will develop. Experiencing other cultures and bringing them together in a virtual workplace will create such a dynamic environment that I believe it’s the way forward for innovation and creativity.