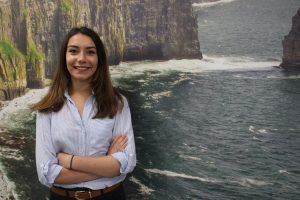 I think I was always unknowingly destined to be an engineer. During my Junior Cert days, my class entered an essay competition run by Cork Institute of Technology titled “A Day in Life of a Scientist”. While most people wrote about testing chemicals in laboratories, I wrote about how I was already being a budding scientist. I never wanted a static job, but always loved the idea of innovation and creation. Surprisingly enough I ended up winning and was given a Nintendo as a prize! The sense of fluidity and constantly trying new things has spilled over into my personal life too. I’ve never wanted to stay static, and have forced myself to continually learn and try new things.

I grew up in Poland as an only child and was pretty quiet and bookish. I was quite timid and didn’t participate in team sports or other clubs, so when I went to college I was determined to try a variety of new activities and keep bringing fresh ideas into my life. I started playing badminton and have kept that up and now also play tag rugby. Since I’ve graduated I’ve also given running a go and was delighted with myself for doing the 10km Great Limerick Run this year. I certainly don’t look like a marathon runner but I went for it and surprised myself by how much I enjoyed it – the “runner’s rush” is a real thing!

I’m only a year out of college and am about to mark my first anniversary at Intel so I’m still getting used to the world of work but I love being part of a really close team. We’ve done various team events together like go-karting, mountain-biking as well as trampolining.  I’ve realised I really get energy from being around other people and when I began Intel I kept my promise to myself to try new things, so I’m also involved with the Sports and Social club on site. I run some of the TGIF events and became their treasurer because I wanted to experience more financial skills. I love chatting to people and would consider myself an extrovert now. I think what I’ve learned most over the last few years is that I can be many things and not always limited by what I thought I was.

One of my life passions is music so I decided that this year instead of going on one big holiday, I would travel to various music festivals. To start the trip off I went to Brussels for the Rock Werchter festival where the likes of Bastille, Florence and the Machine as well as Macklemore played to approximately 90,000 people. The crowds as well as the artists were amazing. Recently I travelled to Oxford for the Truck Festival which was similar to a tropical holiday due to Britain’s heat wave at the time, and the energy was unforgettable. I also headed to Cork for the Indiependence Festival which was amazing too. I do want to travel to some exotic destinations at some point too, especially Asia and the likes of Japan, China and Thailand. I’ve really learned that facing my fears and learning to step out of my comfort zone is exhilarating and well worth the initial doubts, which is why I’m currently toying with the idea of sky diving.

If I could give advice now to my teenage self it would be to do more of that. I was so focused on the academic side of things I didn’t let myself really enjoy the social side of life. That’s certainly changed now! When I’m older I want to look back and know that I kept learning, and kept pushing myself to explore as many paths as possible. I want to have stayed open to the endless opportunities and possibilities. I honestly believe in making little changes every day, and before you know it, you’ve done a lot of good things.