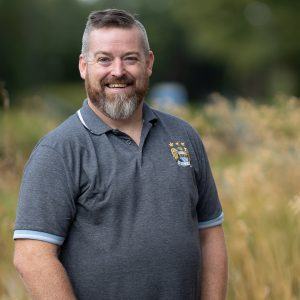 I’ve worked at Intel for 22 years in the FAB clean room where the magic happens!  I met my wife, Dee here (in FAB 10). I remember seeing this lovely girl operating one of the machines I was working on as a technician. One day I plucked up the courage to ask her when she was going on a break and that’s when we began chatting. We officially got together at an Intel fancy dress night in Boomerang!   We had our first baby – nicknamed the Metal Etch Baby because of where we worked – in 2000 and our second in 2003, the same year we got married.  Of course that ‘Metal Etch baby’ is now 19 and studying Robotics!

My life took an unexpected turn in May 2006.  I fell asleep at the wheel of my car, and crashed just 1km from home. It was five weeks before I opened my eyes, and I still have no memory of the accident. I suffered a massive brain injury and was in ICU for 8 weeks, followed by three months in Mullingar and then two months in Dun Laoghaire rehab.

I had to learn how to speak, walk, eat, and write again. The injury had completely wiped out certain brain cells that knew how to do those things. Your brain cells follow a certain path with everything you do, but my accident disrupted the path and it became like a maze, but over time, as I learned to do everything again, it grew new paths.  But it was really frustrating not being able to say what I was thinking. 2006 was a hot summer and there was a male nurse who would bring me out round the hospital in the wheelchair and he would always ask Dee if she wanted to come. I couldn’t talk and remember being angry thinking he wanted to chat up my wife!  (I later found out of course he wasn’t!)

My kids Daniel and Luke were only six and three at the time and Dee was in hospital every day I was in a coma. Except one. Of course that was the day I woke up! She had initially been told to expect the worse, but then when I woke up she was told it would be two to three years before I would walk again. I’m a pretty determined fella though, and I’m proud to say I walked out of that Rehab centre, saying goodbye to the nurses, five months later. I like to be busy so I found filling the days hard. My family bought me membership of a gym, and my three year old loved pushing me in the chair round the house thinking it was great craic, but I was desperate to get back to work. I eventually came back in September 2007, working up to the twelve hours again over the course of a year.

Before the accident I would have played GAA and soccer but I’ve never gone back to contact sport. In 2011 I had high cholesterol and didn’t want to take tablets so I started walking which led to jogging. I like to set myself goals and so I decided to run a 10km race. I’m always shooting for the stars so although I told no-one, I trained for the Longford half marathon which I did in July 2012, followed by another one three weeks later. Three weeks after that I did a 3/4 marathon, and then six years to the week after my accident I completed the Dublin marathon, running for Brain Injury Ireland.

Come 2013 I decided to try some sprint triathlons. So I did four of those, and in 2014 I progressed to Olympic distance triathlons. It felt good to feel I was making the best use of my recovery. Now, for the last few years I’ve done the 900km Cycle for Suicide around Ireland. it’s a really important cause for me to be a part of because a month after my wedding to Dee in 2003, my younger brother Alan took his own life when he was just 26. He was a happy, lively guy and telling his friends was terrible because everyone was so shocked.

I think positively all the time and believe as long as those you love are cared for, enjoy yourself. I believe in living every day. Since the accident I’ve been to New York and the Grand Canyon with my wife. Intel brought me to China for work and one day I was standing on the Great Wall of China thinking, ten years ago I was nearly dead, and now look at me. So that’s my mantra now – If you can do it, go do it.